Notions for Writing Up an Art Project 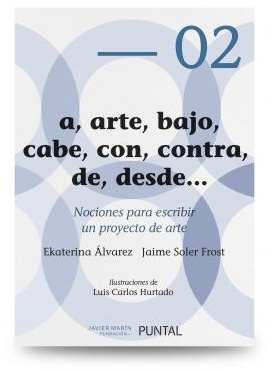 This is simultaneously a brief compendium of useful tools for building an idea with words and a simple guide for effectively writing a project.

Based on their experience in publishing and publications in the art world, the authors use an illustrated glossary format to gather and reinvent a catalogue with terms from the field.

The aim is to offer the reader direct access to the basic tools and minimum definitions needed to deal with the blank page, since moving from the spoken to the written word requires a series of steps to get good results.

So, the book is an invitation to explore or freely investigate its pages without running the risk of getting lost in a long discourse or treatise.

Ekaterina Álvarez is an editor who has worked in different cultural publishing efforts involving contemporary art. She was the editorial coordinator of the Turner Collection of illustrated books. She did graduate studies in U.S. and Czech literature at the Carolingian University of Prague. She was the general coordinator of Mexico City’s Casa Vecina (The House Next Door), where, with Luis Felipe Fabre, she co-edited the magazine Galleta China: arte y propaganda (Fortune Cookie: Art and Propaganda), and edited the Extended Studio Collection in collaboration with Willy Kautz. She works as a freelance editor of illustrated books, for more than 15 years specializing in editing art catalogues. She is currently the head of publications at the University Contemporary Art Museum (muac) and the Folios Collection.

Jaime Soler Frost is an editor, translator, and visual artist who has exhibited in Mexico, the United States, Belgium, and Luxemburg. As editor, translator, or designer, he has collaborated in the publication of catalogues and art books with institutions like the Old College of San Ildefonso, the Economic Culture Fund publishing house, the Bancomer Foundation, the Jumex Foundation/ Collection, the National Institute of Anthropology and History, the National Fine Arts Institute, the Carrillo Puerto Art Museum, the Franz Mayer Museum, the National Art Museum (Munal), the University Contemporary Art Museum (muac), the Orfeó Català de Mèxic, RM Editores and Siglo XXI Editores publishing houses, and The Barragán Foundation (Switzerland), among others. As an author, he has contributed to the books Obra negra. Tomás Casademunt (Under Construction: Tomás Casademunt; Arquine, 2013) and Anish Kapoor. Arqueología: biología (Anish Kapoor. Archaeology: Biology; muac, 2016). He headed the Libros del Umbral publishing house and is publications coordinator at the unam Institute for Aesthetic Research.

Luis Carlos Hurtado is an artist and writer who studied visual arts at the La Esmeralda academy. His recent projects explore daily practices in Mexico’s Southeast in order to develop conceptual relationships. His work has been shown in Mexico, the United States, Greece, and Colombia. In 2010, he was awarded a residency in Brittany, France, and in 2011, he became a member of the National System of Creators of Art. His book Bitácora de viaje (Travelogue) was published with support from the government of the state of Campeche. In 2015, his feature article “La verdad no tiene precio” (Truth Has No Price) was published on the Horizontal digital platform. In 2009, he founded MoNDAo Corp. with Gabriela Rodríguez, a space for multi-level artistic experimentation that includes both publishing and graphic work (mondaocorp.com.mx).