Chalchihuites by Javier Marín at the National Museum of Korea 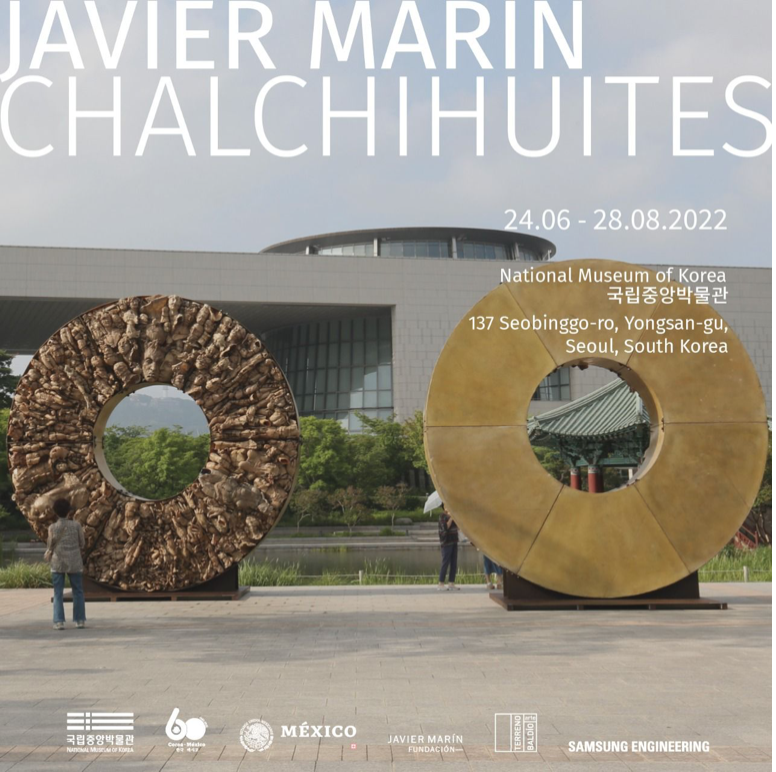 Chalchihuites by Javier Marín at the National

24.june.2022- press release for immediate release.- By invitation of the National Museum of Korea, the plastic artist Javier Marín presents his work “Chalchihuites, offering a contemporary vision on pre-Hispanic Mexican symbols, achieving a dialogue with the special exhibition “Aztecs: the people who moved the sun”, which recently inaugurated on May 2nd in the city of Seoul as part of the commemoration of the 60th anniversary of the establishment of diplomatic relations between Korea and Mexico.

In the Mesoamerican world, the chalchihuite is the precious stone that seems to represent the vision where there is no beginning or end, but a circular continuity. Javier Marín presents in National Museum of Korea the urban installation “Chalchihuites”, two monumental rings of five meters in diameter made with fragments of his own sculptures, assembled with wires. The artist highlights the fragmentation and collective re-construction, past and present merged in different ways of thinking and representing ourselves.

According to the art historian, Leticia Staines Cicero, In Mesoamerica, “water is the vital liquid of nature bestowed by the gods and welled from the earth, that gave life to humankind; the same could be said of blood. Therefore, the Nahuatl word chalchihuitl, which means “precious stone,” could refer to precious water, or when it was red, it was connected with blood, with the act of sacrifice in which men shed their blood for the gods.To this voice, men gave the form of a concentric circle; sometimes with the inner disk filled with some other material or color. Its valuable symbolic meaning is found in much of pre-Columbian art. Many jadeite beads have been found as an offering or as part of the trousseau in royal tombs, as it was an insignia of the divine”.

Pre-Columbian Mexican traditions and contemporary developments in art merge in this installation that has previously been shown at the Casa de América in Madrid; at the Piazza del Duomo in Pietrasanta; in The Hague, the Netherlands; and the Royal Museums of Fine Arts in Belgium and Luxembourg. In Mexico, it has been presented in the Port of Veracruz, Mexico City, Morelia, Uruapan, Aguascalientes, San Luis Potosí, Cuernavaca and León, Guanajuato.