Steps for Applying for Cultural Sponsorship 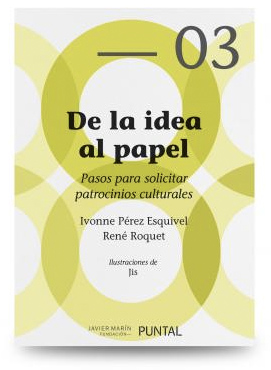 This is a compendium of tools and tips to make life easier for people who want individual or group funding for cultural projects.

The authors, with ample experience in the design and management of calls for projects, show the reader the main elements of a project, the right way to present a budget, and how to evaluate results. They also analyze in detail a sample of calls for projects and make the necessary recommendations for submitting appropriate requests in line with institutions’ requirements.

In addition, they look at some examples of the most common errors in the application process and in expressing ideas. But, above all, they emphasize that the most important step is to read the rules of the game carefully.

Ivonne Pérez Esquivel received her bachelor’s degree in history from Mexico’s National School of Anthropology and History and her master’s in cultural and communications studies at the iconos Institute of Research in Communications and Culture, where she is currently studying for her doctorate in transdisciplinary studies of culture and communications.

Ivonne has worked since 1994 at the National Fund for Culture and the Arts (Fonca), where since 1996 she has headed the area of Cultural Projects and Co-investments. This department manages the programs of Co-investments and of Support for Professional Artists Groups in Performing Arts, Mexico on Stage.

René Roquet has studied language and literature, cultural management, and cultural and management markets. He has contributed to magazines, newspapers, and anthologies and authored the book El hombre sin pertenencia (The Man without Belonging; Ficticia, 2005). He has been working at the National Fund for Culture and the Arts (Fonca) since 1995 in the Young Creators program, where he has organized more than 75 art meetings, headed more than six support programs, and participated in crafting and regulating different calls for projects. He has been an advisor to festivals and performing arts markets as well as the general coordinator of the Encounter of the Performing Arts.