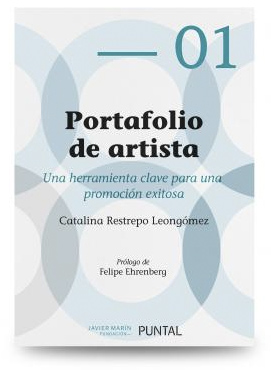 The idea of the artist’s portfolio has changed with time, but whether printed or digital, it continues to be essential for the dissemination of art work.

This book offers practical recommendations born of experience and different ways of compiling a portfolio, so that, more than simply a file of finished works, it can be a useful tool for publicizing the overall trend of the artist’s work.

The author traces a simple, direct route for collecting the material, registering it correctly, writing the accompanying copy, and designing it. She also helps us understand how and when the right moment to show it is, based on a series of

Catalina Restrepo Leongómez graduated from the Javeriana University of Bogotá’s School of Visual Arts. She developed the LivingArtRoom project to promote the work of contemporary artists through their portfolios, and also founded Larmagazine, an interactive, bilingual contemporary art app. She has participated as a lecturer, curator, professor, and judge in different artistic and cultural institutions like Puebla’s Amparo Museum; Monterrey’s Contemporary Art Museum (Marco); and Mexico City’s Casa Vecina (The House Next Door). She has also facilitated the inclusion of several artists in important collections. In addition, she has established links with forums like the Pompidou Center in Paris; Video Dumbo in New York; Latino Latino in Italy; Fotología in Bogotá; and the Contemporary Cali Festival, among others. She recently inaugurated an educational space in Monterrey, Larschool, for the integration and promotion of the local artistic community.

Felipe Ehrenberg (1943-2017) exhibited in museums in the main cities of the Americas and Europe. From 1968 to 1974, he lived in England, where he founded what is the now legendary Beau Geste Press. As a founding member of the Pentagon Process Group, he was part of the 1970s group movement. Theoretician, essayist, and specialized columnist, he gathered an anthology of his writings in Vidrios rotos y el ojo que los ve (Broken Glass and the Eye that Sees It; cnca, 1995). He gave the seminar El arte de vivir del arte (The Art of Living Art) for more than 20 years throughout Mexico and abroad, and summarized it in a volume of the same name (Biombo Negro Editores, 1991). In 2008, he celebrated 50 years as a neologist with a retrospective exhibition entitled “Manchuria – Visión periférica” (Manchuria – Peripheral Vision) at Mexico City’s Modern Art Museum. He was Mexico’s cultural attaché in Brazil from 2001 to 2006. In collaboration with members of the capital city’s four Factories of Arts and Trades (Faros, or Lighthouses; the name given to community cultural centers set up by the Mexico City government), he erected the huge Day-of-the-Dead offering in the city’s Zócalo central square, dedicated to the victims of the 1985 earthquakes. His work and life left a huge imprint on artistic milieus in Mexico and abroad.