What Purpose Does It Serve?

Although there are numerous manuals on how to write academic theses, this book refers specifically to theses in the visual arts and related fields.

Research processes, methodologies, types of analysis, and the presentation of results are conceived based on the practice of the visual arts, which is valuable because artistic research is a dynamic and growing field that is still evolving. Therefore, this book links the enormous diversity of processes in artistic production with the more or less rigid requirements of academic institutions.

Persuasive and compelling, the authors set forth reasons why doing a thesis is relevant and provide tools to carry it out with conviction. They propose thinking about the thesis as a research project to probe an artist’s personal production; exploring the ways of thinking of other authors and artists; capturing in writing reflections on production itself; contextualizing a phenomenon, moment, system of thought; contributing to the accumulative nature of knowledge; while also producing a source so that others can research your work, the knowledge you convey in it, and your way of understanding art.

This publication highlights how the advantages of getting a degree with a thesis outweigh the disadvantages, and it sets forth the path to achieve it in the best way possible. 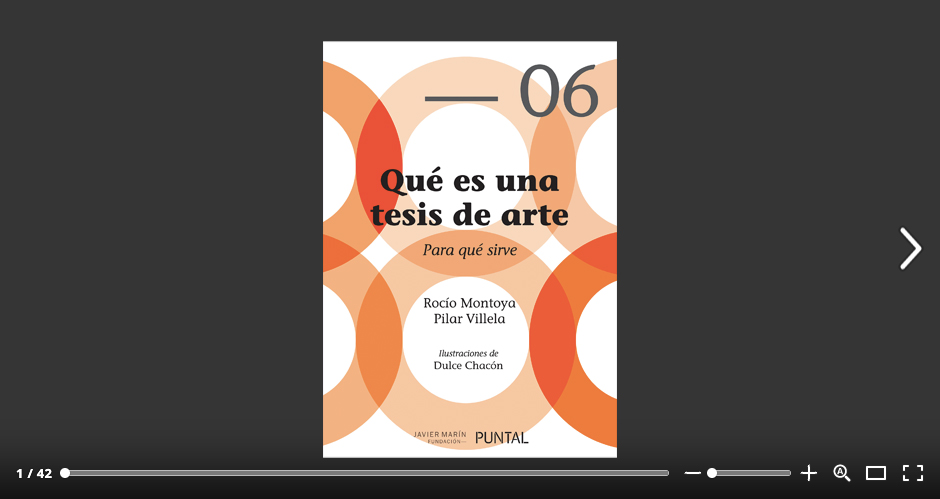 Rocio Montoya Uribe (Mexico City, 1984) earned a master’s degree in Visual Arts at the Faculty of Arts and Design (FAD) of the National Autonomous University of Mexico (UNAM) and an undergraduate degree in visual arts from the National School of Painting, Sculpture, and Printmaking “La Esmeralda” (ENPEG). A three-time grant recipient from the Young Creators Program of the National Fund for Culture and the Arts (FONCA) with a major in Graphic Arts and Drawing.

As a professor, she has given classes in drawing and photography, art history and theory, aesthetics, semiology, image analysis, and research tools at universities such as the ENPEG “La Esmeralda,” Autonomous University of Mexico City, Intercontinental University, SAE Institute, University of the Americas, among others. She is currently studying the processes and methodologies in the practice of art research. Her work explores the role of the photographic image in the construction of the historical narrative in media such as photography and drawing.

His opinion is valued as one of the fundamental voices in Mexican visual art.

Pilar Villela Mascaró (Mexico City, 1972) has presented her work individually and collectively in Mexico and abroad.

She has written numerous articles on contemporary art and has organized activities, such as exhibitions and academic encounters, concentrating particularly on the relationship between art, dematerialization, and economics. She has taught at different institutions, such as the National School of Visual Arts (ENAP) of the National Autonomous University of Mexico (UNAM), National School for Painting, Sculpture, and Printmaking “La Esmeralda” (ENPEG), Ibero-American University, and Center for Design and Television. In addition, she has worked at diverse cultural institutions, such as the Siquieros Public Art Hall, the MUCA Roma, and Channel 22. She was a member of the prestigious National System of Creators (2013–2016).

She earned her undergraduate degree in Visual Arts at the ENAP (now the Faculty of Arts and Design [FAD]) of the UNAM and a master’s degree in Aesthetics and Art Theory at the Centre for Research in Modern European Philosophy (CRMEP) at Middlesex University, London.

Today she is a professor at the FAD, UNAM, where she is editor-in-chief of the forthcoming art research journal ArteDiseño.